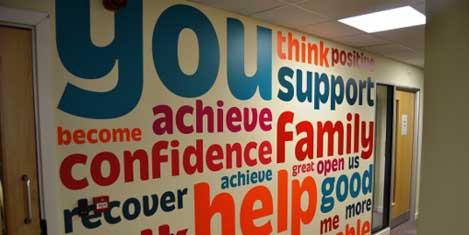 Three Addaction centres in Lincolnshire have been given a revamp thanks to award-winning signmakers, Allen Signs. The company was brought in to give the Addaction buildings in Lincoln, Boston and Grantham, which were undergoing a complete refit, a new look. The idea was to create bright and welcoming environments for the service users - people overcoming addictions - which would reflect the positive aims of the organisation.

Work at the Lincoln site on Newland included using translucent cut out vinyl lettering to display quotes and inspirational messages on the internal walls. This was then colour-matched to reflect the artwork and the organisation’s branding. As well as internal work, signs were also put up outside. Work was completed in just two days to ensure as little disruption to the centre as possible.

Work at the High Street site in Grantham and the Wide Bargate premises in Boston involved removing a mirror film on the windows and replacing it with a frosted etch stripe detail which let natural light into the building whilst obscuring the view of passers by into the meeting rooms. The overall designs and concepts were carried through to each site, but the messages and quotes as well as the colours used were changed, to give each centre its own identity.

Glen Merryweather, Sales and Marketing Executive at Allen Signs based in North Hykeham near Lincoln, said, “We worked with each team at the Addaction sites to discuss the options available which would help to turn their ideas into reality.  The Grantham and Boston Addaction sites presented further challenges for us as we needed to come up with an inventive way to allow light in while obstructing the view in to the meeting rooms. We’re very pleased with the eye-catching and engaging graphics now in place at all of the sites."

He continues, “It was great to work with Addaction, helping them to engage with their clients and improve the facilities and services they offer.  We hope to build on this success so far by helping to provide a solution for their London Head Office later this year.”

Steve Hewish, Locality Manager for Lincoln and surrounding areas at Addaction, said, “Our aim was to create an environment where people could seek the help and treatment they need in a positive setting, which is where the idea for the quotes and bright colours came in.  When we started asking around we were told it would be a difficult, if not an impossible job. Then we had our first meeting with Allen Signs and they just got on with it. All the quotes are from service users from each centre, so they really do mean something. We wanted to brighten the place up, which has been very successful. The whole project has had a positive impact on service users.”