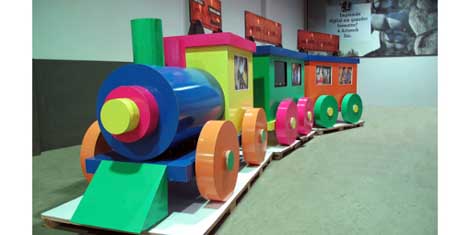 Brazil-based Artwork Digital produced a 3D board model of a gigantic toy train printed on 16 mm Re-board on a six-colour Inca Onset S20.  The model was produced as an eye-catching display for Encontro Marcado com Fernando Sabino, an exhibition celebrating the life and work of the seminal Brazilian author. The train’s windows were filled with both static images and two television monitors playing DVDs, bringing a measure of interactivity to the display.

Bernardo Sabino, the late author’s son, first approached Rômulo de Abreu Guimarães of Artwork Digital to construct an accurate replica of the train from one of his father’s works. “It was not easy to create,” says de Abreu. “There were lots of curves,” an issue that was tackled with help from Stora Enso Re-board experts.

Perhaps equally challenging was the printing itself. “It is very difficult for any digital printer to print smooth, solid colours. Sometimes, there’s banding, or insufficient solid coverage,” he remarks. For a toy train that was supposed to look hand-painted, this was a key detail that could make or break the project. “With the Inca Onset S20, we achieved it perfectly. In fact, people thought it was vinyl rather than print, because it was so perfect.” To add even further realism to the finished product, Artwork Digital applied a layer of gloss varnish to the train.

The result was a 7-metre (23-foot) long model that looked as though it had rolled out of Fernando Sabino’s writing. “His son was very happy,” remembers de Abreu. Previously the exhibit had featured a 2D paper train, and “it was not very good.” This one, however, “looked just like a big toy train. Sabino’s son was very, very happy with that.”

De Abreu was equally proud of the results. “I liked this job very much because it was not easy to print and assemble. I really wanted to win a prize with this one. I sent it out locally for a lot of awards, but nobody understood the complexity and difficulty of the job. Then, with Inca’s expert IDEAs judges, it was recognized,” winning an IDEAs Award for Interactive Display.

Barney Cox, an Inca IDEAs judge, adds, “It looks great. It is nice to see the scaling up of characters in a book to a bigger scale, and from 2D to 3D.”