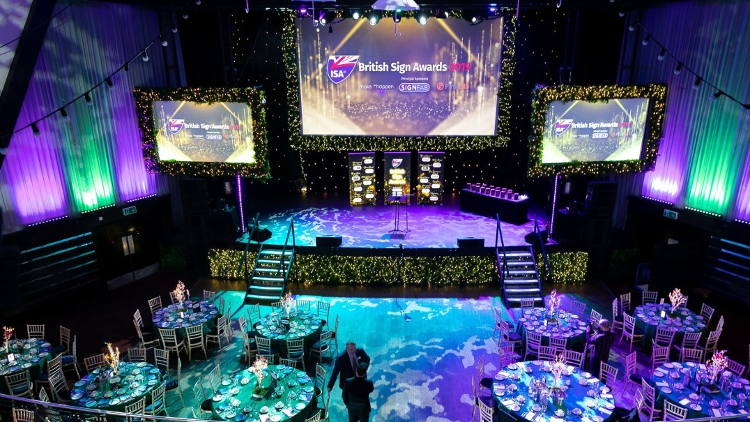 On November 14th, the UK sign and graphics community came together to celebrate the outstanding achievements of the industry over the preceding 12 months.

Held at the Athena in Leicester, the seventh ISA-UK British Sign Awards was the biggest and best yet. Joint headline sponsors for the event were Make It Happen, SignFab (UK) and FirstLiteLED.

David Catanach, director of ISA-UK, formerly known as the British Sign & Graphics Association, said:
“The 2019 ISA-UK British Sign Awards received more entries than in any other year and almost 400 people attended the glittering gala event, which was hosted by actor, comedian and TV presenter Shaun Williamson.”

“But the real stars of the event were our award-winners and shortlisted companies,” continues David. “We had a host of inspiring entries, all demonstrating the outstanding technical skills, innovation and creativity that make the UK sign industry world class.”

The judging procedure for the awards is rigorous, with the identities of entrants carefully redacted so that judges are unaware of the entrant’s name until a decision has been reached. Working to strict criteria, each judge awards up to ten marks to each submission and the outcome isn’t known until the scores are added up.

“We are fortunate to have a fantastic range of expert judges who give their time for free to support us with the awards. The scoring was extremely close; in one category only half a point stood between the winner and runner up,” says David Catanach. “In the end the judging revealed some fabulous winners, representing the full spectrum of the industry.”

The prestigious award for Sign of the Year was won by Goodwin and Goodwin for their work at Dorset House, an art-deco building in London. The winning project included the primary building sign plus a curved and stepped canopy in polished stainless steel and stainless steel and glass door surrounds, all intricately produced in the art-deco style.

The trophy was presented by Mike Smith, Operations Director at SignFab (UK) Ltd on behalf of joint corporate sponsors SignFab, Make it Happen and FirstliteLED. The other shortlisted projects in the category were ‘IM External Signage’ by isGroup, ‘One Bartholomew’ by Signbox, and ‘McDonalds’ by Butterfield Signs.

Another special award was for Young Signmaker of the Year, sponsored by Antalis, The prize included the chance to visit Sign Expo, the world’s biggest sign exhibition, which takes place in Orlando, Florida next year. The prize was courtesy of the International Sign Association, represented at the awards event by the association’s President, Lori Anderson, who flew in from the USA especially for the occasion. In addition to the flights and accommodation provided by ISA, the winner will also receive £250.00 spending money from ISA-UK.

The winner of the Young Signmaker accolade was Daniel Garrett of Graffiti Design International. Dan joined Graffiti in 2013 and over the past six years has worked his way up to become Joint Works Manager at the East Sussex-based business. Also shortlisted in the Young Signmaker category were Ethan Davies from Elite Signs and Kieran Wealleans from Interplan Sign Systems.